The most wonderful time of the year is nearly upon us with preparations on the run up to Christmas well under way. You may have your own set of traditions or customs that help to make the Christmas season so memorable. For many people Christmas is filled with shopping trips, decorating a Christmas tree and hanging stockings! Children patiently wait for Santa Claus to arrive on Christmas Eve, traditionally leaving out cookies and milk for his arrival.

The Christmas pickle tradition originates in Germany. On Christmas Eve, parents hide an ornament in the shape of a pickle in the Christmas tree branches for it to be out of sight with the branches camouflaging the ornament. 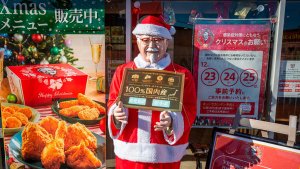 Presenting the biggest success in holiday marketing since Coca-Cola made the jolly red-suited Santa Claus that we all know and love.

The tradition of families devouring buckets of fried chicken on the 25th of December was started by a wildly successful KFC advertising campaign, first introduced in 1974 by Takeshi Okawara (the manager of the first KFC in Japan), despite the fact that only a small percentage of people in Japan are Christians.

In fact, it has grown so well-liked throughout Japan that bookings for restaurants and requests for specially packaged deliveries are made months in advance.

The Philippines’ City of San Fernando hosts their annual Giant Lantern Festival (Ligligan Parul) in mid-December with a competition of enormous parole lanterns being part of the festivities.

The tradition began in the early 1900’s and with its colourful lanterns, crafted with love and aglow of Christmas spirit. It is one of the biggest Filipino Christmas traditions. 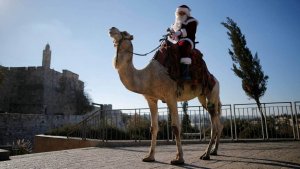 Africa – Christmas across the Continent

Across the continent, belief in and traditions about Santa also vary. Some countries just don’t believe in a red-suited jolly man arriving on his sleigh to leave presents for the kids.

In Liberia, you’ll see Old Man Bayka, the ‘devil’ who doesn’t give presents but instead walks the streets on Christmas Day begging for presents instead of doling them out. Additionally, instead of saying ‘Merry Christmas’ in Liberia, the locals say ‘My Christmas on you’.

In Kenya meanwhile, Santa is depicted as arriving on a camel or bike instead of a sleigh! 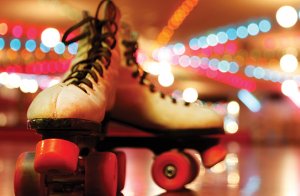 In Caracas, the capital of Venezuela, on Christmas morning people skate their way to Christmas mass. This tradition is only done in Caracas with special holiday masses being held between the 16th and 24th each year. The tradition is so popular that the government closes the streets to cars, buses, and bikes from 8pm to allow the skaters to safely make their way to mass.

Legend has it that children tie a piece of string to their toes and dangle them outside their bedroom window as they sleep so as skaters’ ‘slide’ by, they tug at the string to wake the children up to tell them to get up and get ready for Christmas Day.

After the Mass ceremonies ends, the celebrations continue with people flooding the streets and everyone making their way to each other’s homes to eat, drink and dance together.

Have a very Merry Christmas from all of us at Freedman, whatever your tradition is!